The Physics of Meaning: Band Profile 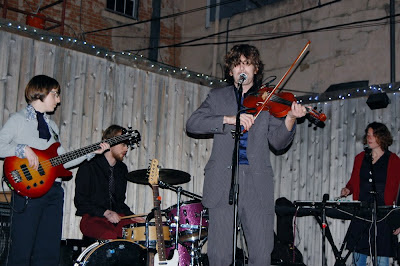 This review has been delayed a few days because other things came up, but last Tuesday, we had a fantastic band here at The Amsterdam Bar called The Physics of Meaning. They were incredible.

Here's the Knoxville Voice's review of of the band and interview with its front man, Daniel Hart:

If you've never heard The Physics of Meaning, the Chapel Hill-based band fronted by Daniel Hart of The Polyphonic Spree and St. Vincent, that may be about to change, as there’s a good chance they may become inescapable. This band’s ornate songs with richly textured orchestral strings combined with profound lyrical themes are sure to rest in your mind after a thorough listen.[1]

The thing that struck me about this band was its professionalism, their musicianship, and their tight performance style. Like of a lot of other bands this week, The Physics of Meaning are headed for South by Southwest in Austin, Texas.