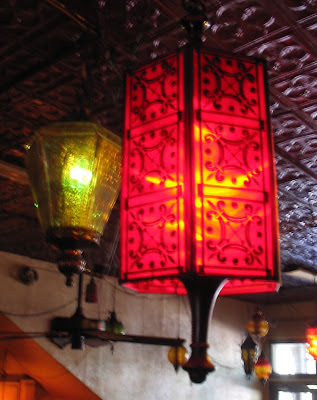 Last Saturday, LESLEY TÉLLEZ of Quick DFW was nice enough to stop by and check us out. She had some very kind words to say about The Amsterdam Bar and all the hard work we've done over the past couple of years.

The Amsterdam Bar isn't the coffee house you remember.

Since changing the name more than a year ago, the owners of the small Exposition Avenue space have built up an entirely new establishment. It's brighter. Warmer. Full of people – hip people, who look like they'd otherwise hang out at Lee Harvey's. Or anywhere in Williamsburg, Brooklyn.

The bar has a huge back patio, installed last June, where bands play when it's warm enough.

The inside is busy, too. Monday is Bad Ass Jazz Night, Thursday is trance, and on Sundays co-owner Sheldon Hubbard spins anything from Sinatra to punk. Wednesday is European Bike Night, where patrons can show off their Triumphs and Ducatis.

When we arrived around 9 p.m. on a recent Saturday, Irving-raised supermodel Erin Wasson was having her birthday party.

The place was packed with late twentysomethings in jeans, funky hats and cool accessories. Chatter and laughter echoed under the high ceilings, and the Kinks' "You Really Got Me" blared. (That's a rarity. Classic tunes like that aren't played on jukeboxes much around here.)

Several people wore X-rated balloon hats, fashioned by a middle-aged clown who was hanging out in a corner, wearing a rumpled top hat.

"You can get a dog [doing dirty things to] a cat," we overheard from an apparent balloon enthusiast. "I hired him for my birthday party."[1]

We've made lots of changes to the old bar and we're glad that folks appreciate what we've done.
at 12:02 PM No comments: