We are happy to announce that the Amsterdam Bar is carrying a selection of beer brewed by Community Beer Company, a brewer of high-quality craft beer for the Dallas-Ft. Worth Metroplex! We carry Community's Public Ale, Vienna Lager, and Community Witbier.

Fruity esters and malt greet the nose with a hint of herbal/spicy hops. Flavor is rich, bready malt with a complex fruity ester character balanced by the moderate use of a blend of English, German and American hops.

Clean malt aroma with fleeting hints of noble hops and light sulfur. Noble German hops used in the brewhouse, lend their telltale spicy, fruity and tangy notes in the middle flavor, which continues to more mellow malt with just enough bittnerness to keep it balanced.

The aroma from the thick, brilliant white head is bready and lively with notes of citrus and hints of spice. The beautiful cloudy white appearance is mainly from the use of a large percentage of unmalted wheat, which contributes a considerable amount of protein, resulting in the permanent haze and creamy mouthfeel. A high level of carbonation, relative low ABV, and refreshing character of the wheat make this a very drinkable summertime beer to beat the Texas heat!

You can read more at the Community Beer Company's website.
at 6:12 PM No comments:

This Friday: The Amsterdam Stand Up Comedy Revolt! 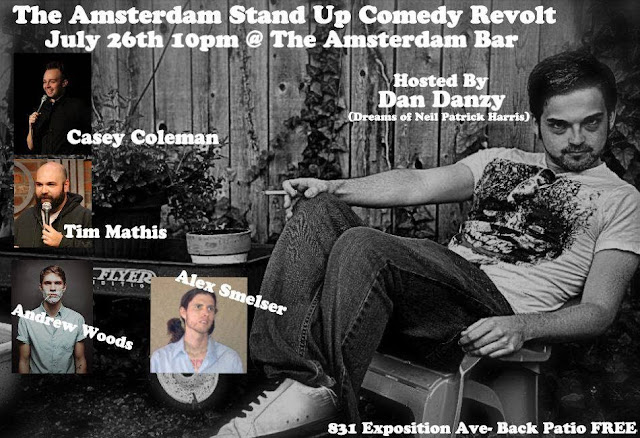 Come out this Friday and enjoy comedy under the stars at the Amsterdam Bar!
at 12:31 PM No comments:

You know the drill, get here early if you want a table for the best night of jazz in Dallas/Fort Worth.
at 5:39 PM No comments:

Founders IPA was just tapped in and we have Sixpoint's Apollo Wheat in stock as well. Drink 'em up!

Founders All Day IPA
The beer you’ve been waiting for. Keeps your taste satisfied while keeping your senses sharp. An all-day IPA naturally brewed with a complex array of malts, grains and hops. Balanced for optimal aromatics and a clean finish. The perfect reward for an honest day’s work and the ultimate companion to celebrate life’s simple pleasures.

Sixpoint's Apollo Wheat
The latest can-tastic Sixpoint release has arrived! You may remember Apollo Wheat from a few years back when it was an American-style wheat beer, but this year it’s been reincarnated as something entirely new…a German-style Kristallweizen. Kristall-what? Well, think Hefeweizen but without the traditional hazy appearance. The yeast has been filtered out, leaving a crystal-clear wheat beer with a softer, cleaner mouthfeel. While the classic notes of banana, bubblegum and clove are just slightly more subtle than in the traditional Hefe, you’ll still get the same frothy white head that these Bavarian brews are known for. Sixpoint’s version is simply delicious….crisp, refreshing and perfect for the warm weather ahead. And at only 5.2% abv, you can surely throw back more than one or two cans in a sitting. Since there aren’t too many craft versions of Kristallweizens out there, definitely take this opportunity to educate your tastebuds and broaden your beer repertoire! Apollo Wheat is now available in 4-pack cans!

We welcome Taste of Dallas this weekend!

Should you be coming to Taste of Dallas this weekend, drop by and have a drink on the way. You know you're going to be parking here anyway. Then stop by on your way home for another; after all, the event closes at 11:00 PM, and we're open until 2:00 AM!
at 4:27 PM No comments:

Email ThisBlogThis!Share to TwitterShare to FacebookShare to Pinterest
Labels: Taste of Dallas, The Amsterdam Bar

We are feeling a little "Lakewood" today

Lakewood Brewing Co. is a local brewery in Garland, Texas. We were feeling a little "Lakewood today," so we're tapping in their Lager, Zomer Pilz, and Rock Ryder! Here are the key statistics.


Beer Name: Lakewood Lager
Beer Style: Vienna-Style Lager
ABV: 4.6%
IBU: 23
SRM: 12
This amber lager starts with a subtle caramel aroma. The coppery hue draws you into its balanced flavor of light malty sweetness and round noble hop bitterness. It finishes dry and clean. Leaving your palate refreshed for another glass.

Beer Name: Zomer Pils (Summer Seasonal)
Beer Style: Czech-Style Pilsner
ABV: 4.8%
IBU: 34
SRM: 3
In summer, Belgians head to the nearest beach, while Texans typically race towards the nearest source of shade. That's because the European sun is far friendlier than the fiery ball glowing over the Lone Star State. Combat the heat with our Zomer Pils. Brewed with Belgian pilsner malt and noble hops, this traditional pilsner is light, crisp, and refreshing. So let that sun keep on burning.

Beer Name: Rock Ryder
Beer Style: Rye/Wheat Beer
ABV: 4.8 %
IBU: 20
SRM: 4
This is a wheat beer for the masses. It pours with a white head and has a cloudy straw color. The addition of rye malt gives it a complexity and subtle pepperiness that's only accentuated by the hops. It's light and refreshing with just enough bite and flavor to quench a Texas summer sized thirst.

All three beers weigh in at under 5% ABV, making them good session beers for the hot Texas summer! The Amsterdam Bar is proud to offer local craft beers like Lakewood Brewing Co.'s line of beers.
at 9:29 PM No comments: 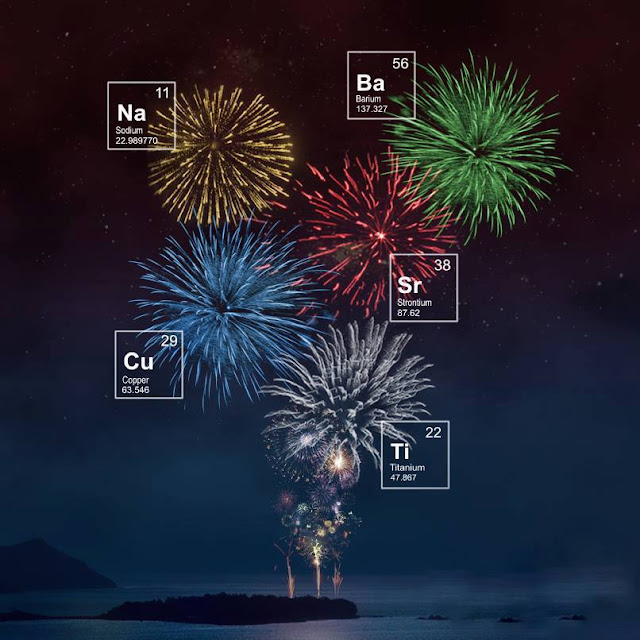 From "I fucking love science":


The chemistry of 4th July fireworks.

Other commonly used chemicals are carbon which provides the fuel, oxidizers which produce oxygen for burning, magnesium which increases the overall brilliance and brightness, antimony that gives you a "glitter" effect and calcium which deepens the colors.


As always we will be open regular hours for the Fourth of July! Today is a perfect day to relax in our beer garden and enjoy a few cold beers before heading over to Fair Park to enjoy the fireworks!

Email ThisBlogThis!Share to TwitterShare to FacebookShare to Pinterest
Labels: 4th of July, Dallas Texas, Fourth of July, The Amsterdam Bar 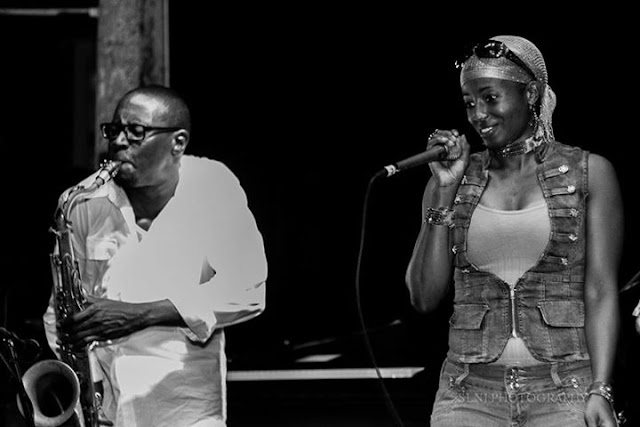 It's a great night for Jazz night with Shelley Carrol and his electric band featuring Verb Kulture. Here's a video of an earlier performance at the Amsterdam.