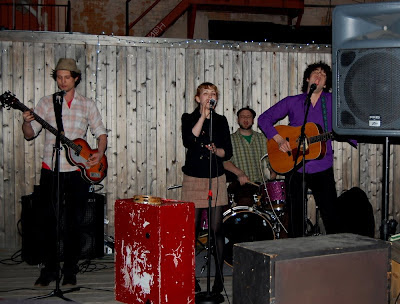 The second of the bands that paid us an unannounced visit last night was The Lisps, a band from New York city, bound for South by Southwest ("SXSW"). Here's how their website describes the band:

The Lisps are a New York-based assemblage of 21st century indie-rock vaudevillians. They write songs about science and love, space and pain, babies and documents. Their performances have been known to involve bloody tambourines, wrestling, lipstick smeared melodicas, tap shoes, old kitchen cabinets and dinosaurs. The Lisps are the public/performative version of all the relationships you're struggling with. That's a pretty fair description, but I'd like to add "high energy" and "a hell of a lot of fun to watch."

You've got to give props to a band willing to dress up as a selection of broiled seafood.

If you are looking for a poppy, up tempo band that's lots of fun to watch, we recommend The Lisps.
at 4:30 PM