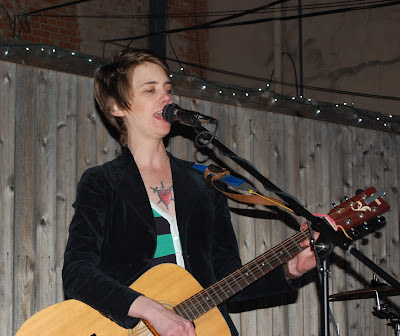 If I had to describe Dallas chanteuse Laura Palmer with two words, they would be "bawdy fun." Think "South Park," performed live and in your face. Ms. Palmer and her percussionist, Li'l Hunky Rooks, opened last night's festivities at The Amsterdam Bar with their repertoire of off-color, but in key show tunes, including "Three Times a Rapist" and "Leaving LA."

Ms. Palmer had the crowd rolling in the aisles before the end of her set. In addition to being a talented musical performer and incurable potty-mouth, Ms. Palmer is a talented improvisational comedienne, and she punctuated her songs with sharp, witty banter. It's easy to see why Laura Palmer is a Dallas favorite.

Check out this interview of Laura Palmer in Dallas Quick:

Q: Before you started writing these songs, did you have any interest in performing?

A: I was a theater major in college, and one of my favorite teachers was my music performance teacher. That really taught me good vocal technique and all that stuff. It also got me thinking about songwriting from a musical theater perspective. And I mean that in the least douche-y way possible. There are these great songs and different styles of writing all over theater.

I love a woman who can work the word "douche-y" into a sentence when describing her music. 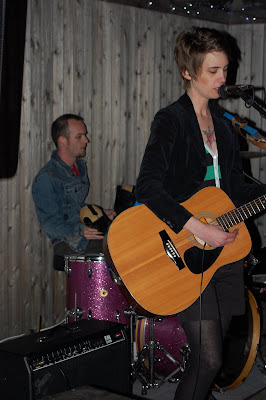 To sum up, if you are a little on the prudish side, you'll end up leaving her show bleeding from your violated ears. On the other hand, if you like dirty show tunes delivered with a Broadway sensibility, we highly recommend Laura Palmer.
at 10:22 AM