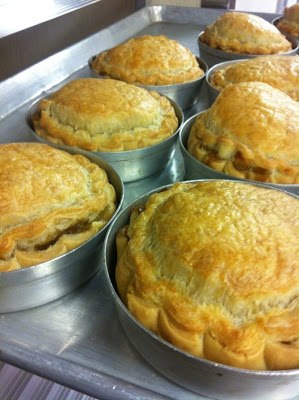 We're looking forward to having the Three Lions Truck out front tomorrow night for Jazz night.

When Cameron Bonfield, came to Texas he did not anticipate starting and running a food truck concept in the emerging food truck scene of Dallas, but fate dealt him a hand he had to play. Joined by his brother Scott in in the fall of 2011, the two worked hard to bring flavorful tacos with a bit of South African spice to the DFW Metroplex. They were able to create a cult following, but something always bugged them. The food they were serving was great, but it didn’t say anything about who they were. Tacos? Englishmen? What is the connection? They began to serve some more traditional English fare along with the tacos and saw demand for the food quickly grow. So, early in 2012 they made the decision to start over and Three Lions food truck was born. A concept that was wholly about their heritage and a higher calling to represent English cuisine in a positive way to the DFW Metroplex. They now run and operate the Three Lions food truck bringing fast, delicious English fare to America.

So here's the value proposition: some of the best authentic English style pub grub paired with a beer from our award winning selection and topped off with the very best jazz in Dallas, Texas. How can you resist? Trick question; you shouldn't resist. Get here early so you can order dinner and get a table for jazz night.
at 10:00 AM